india is known for good black tea, and popular are especially assam and darjeeling. however, there are some other, less known growing areas, including nilgiri. but where do you find the blue mountains, how the nilgiris are also called?
there are three major mountain ranges that divide india into a roughly triangle: 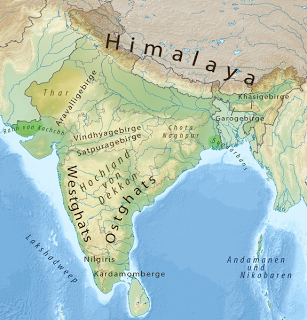 in the north the himalaya, in the east the eastern ghats, in the west the western ghats.

in the foothills of the western ghats, “down” in the south of India, the nilgiris are located. the highest elevation is the "doddebatta" with more than 2,600 m.
there are two explanations for the name "blue mountains": one refers to the bluish haze that appears sometimes in the the mountains. the other refers to a shrub called "kurunji" (strobilanthes kunthiana), which only blooms once every 12 years, and then enveloped the mountain into a sea of blue flowers.
the main town "udagamandalam"  is situated at 2250 meters with about 95,000 inhabitants. udagamandalam and environment were originally settled by the tribe of toda. at the beginning of the 19th century came john sullivan on behalf of the west-india-company in the nilgiris. he obtained in 1820 a plot of the toda, founded a stone house, other englishman followed his example, and slowly the name was anglicized to "ooctamund", or simply "ooty". sullivan recognized the agricultural potential of the area, and started growing "english" products such as potatoes and barley. He made a fortune in the nilgiris, but the cultivation of tea does`nt go back to him.
first tea plants were ordered in 1832 by an english surgeon in china. he noticed, that ordinary camellias, which are closely related to teaplants, grew very well in the climate of the mountains. 1835 a first attempt farm has been created with these plants. the surgeon himself died before the tea plants reached the Nilgiris.
after a successful cultivation around 1855, that had only stopped because no surrounding country could purchased for enlargement, permanently tea cultivation was operated from 1859 in the still existing tea gardens thiashola and dunsdale.
in the meantime was also coffee cultivated in the Nilgiris, but similar to sri lanka / ceylon, it didn`t work really.
the fresh mountain climate is even in summer very pleasant, and so it was like in darjeeling, that ooty became a "hill station". first to accommodate sick soldiers serving well in sanatoriums, and later worked as a "summer resort" for the colonial administration, which wanted to escape the oppressive summer heat in madras, and operated for three months each year from ooty.
the delivery and removal of people and wares had been initially very troublesome, and partially had elephants been used for this purpose. so the british began with the extremely complicated construction of a railway line up to ooty. the nilgiri mountain railway was completed in 1899, and it is the only Indian cogwheel locomotive. as the darjeeling himalayan railway, it also has been added to unesco world heritage.
today, tea is no longer grown around ooty, which is located at 2250 m. the highest tea garden in the nilgiris is now "dunsdale" in over 1,800 m. it requires less effort to grow in those deeper gardens. 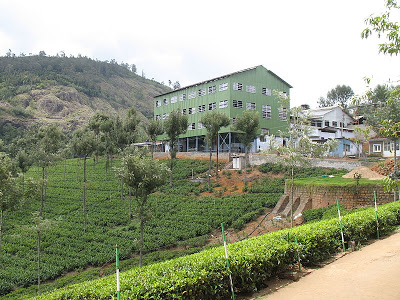 the cultivation of tea in the blue mountains is since the beginning in hand of small and medium-sized gardens. favored by the appropriate sub-tropical highland climate, the tea plant grows very well in the nilgiris. starting in january, continuing to february, can be harvested good first flush, and there were long years also processed good qualities.

end of the 1960 years, much tea supplied in the former USSR. there also average qualities were bought. with the political changes in the sowjetunion and the associated cash weakness, more and more cheap teas were produced in the nilgiris, and under this reputation the tea producers still have to suffer.
you should begin to think differently, and that more and more tea drinkers do so, you can recognize that the good available nilgiris on the german market, are not necessarily the whole year available, because they are sold out.
whether the nilgiris now actually taste like high grown teas from ceylon / sri lanka, or rather as second flush Darjeeling, or whether they are independent varieties, everyone should decide for himself. but first you have to taste a fine nilgiri for this. 😉